Toxic Animal Waste Management in the Face of Extreme Weather

Large concentrated animal feeding operations (CAFOs) and smaller livestock farms produce the food that fills our grocery stores and contributes to countless other industries. It’s an important part of the economy, but irresponsible and improper animal waste management is a growing problem. According to the US Department of Agriculture, farm animals produce more than 450 million tons of manure every year. To put that number into perspective, that’s about three times more raw waste than what’s generated by humans. In that capacity, exposure to animal waste is toxic to human health and the environment.

Federal and state regulations are working to reduce animal waste pollution as much as possible. In these ideal conditions, exposure and contamination can be minimal. But as severe weather becomes more common and storm surges ravage parts of the country, animal waste becomes a serious—and dangerous—problem. The “lagoons” that store animal waste fail and flood, manure from fields turns into toxic run off, and animal waste finds its way into well systems and water sources. Managing animal waste in the face of severe storms is becoming an ongoing issue. Protecting water systems, the environment, and human health depends on understanding the complications related to animal waste management and putting to use best practices to prevent contamination.

What Makes Animal Waste So Toxic?

Animal waste, including that of hogs, chickens, cattle, sheep, and horses, contains disease-causing bacteria, pathogens, and naturally toxic material. Nitrates, ammonia, and methane are all pollutants that affect water quality, and therefore human health. Infections including salmonella and listeria have also been linked to animal feces. When these materials enter wells, rivers, streams, lakes, and other water sources, they put large populations of people at risk.

In 2009, residents of Morrison, WI became ill after animal waste management failed and 100 wells were polluted by agricultural runoff. The parasites and bacteria from animal waste contaminated the town’s drinking water, and the people suffered from chronic stomach illnesses and diarrhea. A five-year-old boy also developed severe ear infections that required surgery because of bathing in polluted water.

For the ecosystem, the situation is just as dire. Runoff containing nitrogen and other nutrients found in manure create “dead zones” in  waterways where an overabundance of algae depletes the oxygen in the water. Without oxygen, marine life including fish and plants die off. The dead zone in the Gulf of Mexico created by manure runoff from the Mississippi floodplain in 2015 was the size of Connecticut and Rhode Island combined.

The Threat of Storm Systems 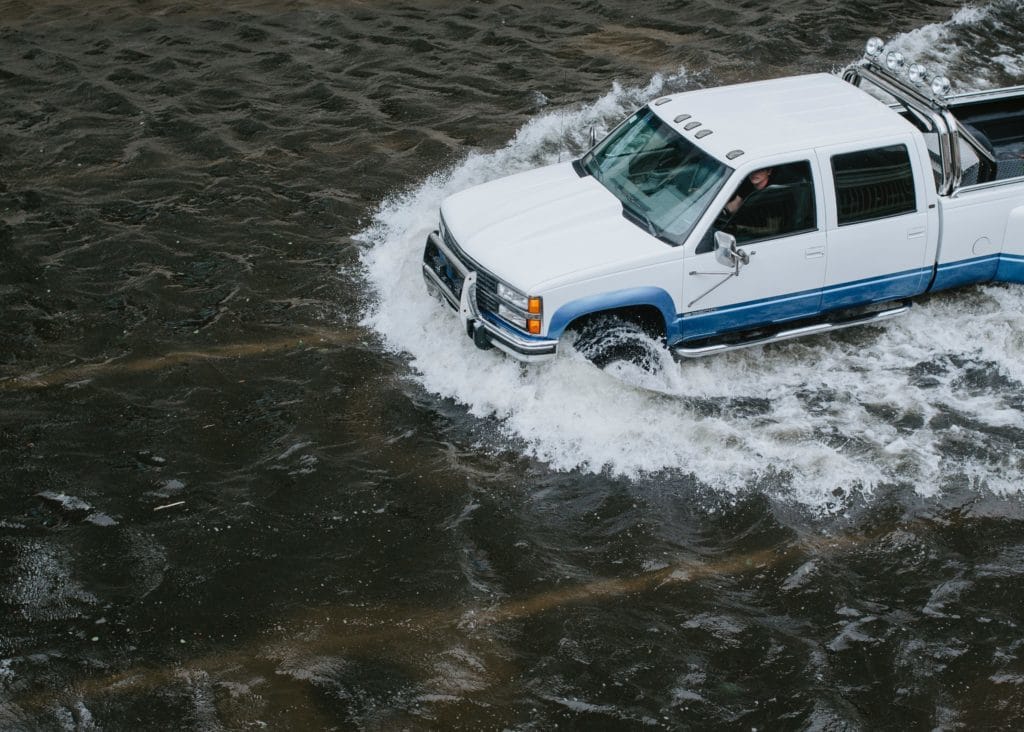 CAFOs and smaller-scale livestock farms utilize large pits, called lagoons, to store their animal waste. These lagoons are usually lined with clay, and when they’re not maintained, they can leak into the soil, and toxins eventually make their way to the groundwater.

Well-maintained or not, all animal waste lagoons are vulnerable to environmental factors—most notably being severe weather. During Hurricane Matthew in 2016, 14 animal waste lagoons in the southeastern United States were either flooded or seriously damaged. Then again during Hurricane Florence in 2018, 17 lagoons overflowed, 21 were inundated by floodwaters, and 2 were structurally damaged. In both instances, and countless others, floodwaters and runoff sent unprecedented amounts of animal waste pollution across the land. Those contaminates infiltrated the water system, and researchers expect it will be years until we know the exact repercussions.

While major hurricanes and floods are of the biggest concern, every storm or heavy rain has potential to create a crisis. Some farmers prepare for bad weather by pumping out their lagoons and spraying the manure on their fields, but this isn’t much of a solution. When it rains, any unabsorbed nutrients and material will be whisked away with the runoff. If a water source is nearby, it’ll end up as pollution regardless of the farmer’s previous efforts. The only way to prevent animal waste from polluting the water system during extreme weather is to heed all federal and state-mandated regulations for animal waste management. Manure is a valuable resource in the agricultural industry, and it is possible to make best use of that supply while also protecting the surrounding water sources and the people who rely on them.

Exact requirements differ by state, but in general, lagoons need to meet a minimum depth and slope to be considered safe. They must be a significant distance from any water source, and livestock contagious diseases must be reported. It’s also important for farmers to follow proper protocol for manure application and bio-security.

In addition to these basic management techniques, there is a growing interest in new technological strategies to improve livestock waste management for the ecosystem. Feed additives can reduce the amount of E. coli found in the animal’s feces, and plastic lagoon coverings and aeration methods are being used to further contain pollutants.

Depending on the number of animals on the premises and the location, it’s often required to submit and adhere to a nutrient management plan. California, for example, requires all confined animal facilities to follow strict standards in accordance to the California Code of Regulations. The health of the community and the ecosystem depend on proper animal waste management, and as storms become more frequent, it has never been more important.